It always feels like home, coming back to Tennessee.

I have been here several times, and I have never failed to find something new each time I visit.

Genealogically speaking, Travel Buddy and I both have many family members who lived and died in Tennessee, in a number of counties.

So the more research we do, the more counties we visit.

This year we visited Franklin for the first time. A beautifully restored town that provided plenty to look at, but the many plantation homes we passed on the roadway into town had us oohing and ahhing, as well.

We also enjoyed doing extensive research at the libraries and courthouses of Wilson, Overton, and Blount counties. Each had important information to reveal on one family or another, and we loved driving through the Tennessee countryside.

After the research, we spent some time relaxing in the Pigeon Forge and Gatlinburg areas. Though tourists have overrun the towns for the most part, you can still find quiet places to visit and restaurants where only the locals eat.

Our favorite area? Definitely Cades Cove. If you’ve never been, take the time to drive back in there and see what life was like a hundred or more years ago. We live in an area where the deer basically rule the town after dark…but we still squealed with delight every time we spotted a deer, elk, or turkey enjoying their calm and quiet fields.

Tennessee has so much to offer…in research, in history, and in beauty. We enjoyed every minute…and sincerely hope our return is soon.

One of my favorite things when traveling through unfamiliar territory is the discovery of familiar things…just not where I pictured them.

High in this category would be the Battle of Tippecanoe. I remembered from history classes the famous slogan “Tippecanoe and Tyler, too,” from the presidential campaign of William Henry Harrison and John Tyler, and I even remembered that the nickname “Tippecanoe” had come to Harrison from his significant contributions at the Battle of Tippecanoe. But beyond that I’ve always been vague about any other details. Who fought in the Battle? Where did it take place?

I was therefore really excited to spot the Tippecanoe Battlefield on our atlas right along the route we planned to take into Indiana! Wait, the Battle of Tippecanoe was in Indiana?? Evidently so. I had always had some vague understanding that the Battle had taken place “on the frontier” somewhere, but somehow didn’t translate that into there being an actual site in existence, today.

The battlefield still exists…a quiet land area with huge trees that apparently still have some old bullets in them. It’s not far from town or the freeway, but the peacefulness of the site is wonderful. 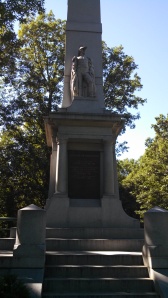 A couple pictures of the William Henry Harrison monument at the Battlefield of Tippecanoe.

Plenty of controversy regarding this Battle exists, from whether it was truly a tactical victory over the Native Americans who may have simply run out of ammunition, to whether it actually led to the Battle of 1812 with the British shortly thereafter, but regardless of how you view the Battle politically, it’s still nifty to come across a site connecting to those history classes of so long ago.

And in Indiana?? Who knew?!

Travel Buddy’s great-grandmother was Mary Snodgrass. She was born in White County, Tennessee in 1855. She married James Dibrell and died in Coleman County, Texas in 1935. James died in 1890, leaving Mary to raise six children alone. She did so, not only serving as the first Postmistress in the county, but she even went back to school and got her chiropractor’s license much later in life.

Mary’s parents were David Snodgrass, Jr. and Elmira Holford. David was born in White County, Tennessee in 1829. Elmira was born in Tennessee in 1837. They married in White County, Tennessee in 1854. We had a terrible time tracking these two down. For the longest time, we weren’t sure where either of them ended up. David served as a Captain in the Confederacy for Tennessee, and was on the losing side at the Battle of Fort Donelson, in Stewart County in 1862. Taken prisoner, he suffered greatly in the awful prison conditions, and even though he was traded, he still had a long stay in the hospital. His regiment was in Mississippi, so he was transferred to a hospital in Yazoo. When the regiment moved on to Clarke County, he was moved to Enterprise, Mississippi, but he never got well. The doctor monitoring his condition recommended he be released from the Army, and five days after, David died, in 1863. Meanwhile, Elmira evidently moved with the rest of the family first to Guadalupe County, and then to Coleman County, Texas, but as she remarried, we did not know where to find her. She is buried with the rest of the family in Coleman County.

David Sr.’s parents were James Snodgrass and Ann Long. James and Ann were both born in Botetourt County, Virginia, James in 1762, and Ann in 1766. They married in Washington County, Virginia in 1781. James served as a major in the Revolutionary War, most notably at the Battle of King’s Mountain. James died in 1828, and Ann died in 1848, both in Glade Springs, Washington County.

If you are related to this line, let me know. Travel Buddy would love to hear from you!

Indiana is one of those quirky places you never knew existed, until you go.

I have been to this state a few times, mostly in an unsuccessful attempt to find out more about my family that ended up here.

I actually have a number of family lines (Cave, Kearby) that ended my direct line in Indiana, and one that moved on west from here (Damewood).

That’s a LOT of direct lineage in one area…and they helpfully passed away in three closely linked counties, too: Dubois, Orange, and Jennings.

Unfortunately, even though I know almost exactly where they are buried, almost isn’t quite good enough.

One is buried on private property, and cannot be accessed.
Five I could not locate, no matter how hard I tried, within the locations of their towns.
Three I did locate, and I feel grateful for those three successes.

I still have more research on a few other lines, but these are the ones I’ve spent the most time with. Libraries didn’t yield anything, so it’s back to the Internet for awhile.

At least as far as Indiana is concerned!

I can’t believe that as many times as I have traveled to and through the state of Illinois, that I have never before visited Springfield, and Lincoln’s Tomb. Such an awe-inspiring site, I somehow never understood that Lincoln is actually buried in a cemetery. But his burial site is truly unique and amazing. 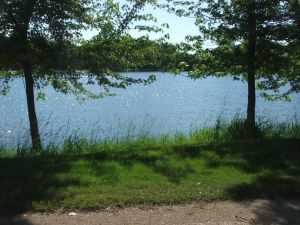 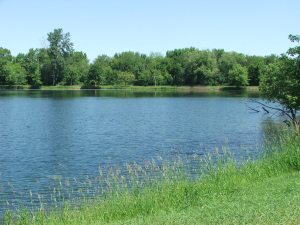 Also while in Illinois, we stayed for a couple of nights at an RV resort, courtesy of a very dear friend. In a beautiful location, the camp sites were situated on two lakes. Great for just kicking back and relaxing for awhile.

This family line is especially near and dear to my heart. My grandma was a Scarborough, and her father, George Clark Scarborough, was born in Dover, Stewart County, Tennessee in 1875. He was a farmer in northern Arkansas, and owned his own tomato canning factory at one point.

George’s parents were John Oscar Scarborough, Jr. and Louisa Dashiell. John was born in Stewart County, Tennessee in 1842, and Louisa was born in Nashville, Tennessee in 1849. They married in Davidson County (Nashville) in 1871. Louisa died in 1883, and Oscar reportedly died in 1937, but I don’t have confirmation for either death, and I don’t have a location for either, although some family trees state Louisa died in Stewart County, Tennessee. But I have no proof for death dates or locations.

Oscar fought in the Battle of Fort Donelson for the Confederacy, and was captured as a prisoner along with hundreds of others. This is the battle where U.S. Grant earned the nickname “Unconditional Surrender.” Oscar worked after the war as a painter.

John Oscar Sr.’s parents were John William Scarborough and Sarah Bosworth. Both were born in 1781; John in Brunswick County, Virginia, and Sarah (Sallie) in Montgomery County, North Carolina. They married in Montgomery County in 1803, then moved to Stewart County, Tennessee with the rest of the family. John William ran a tavern out of his home, and laid out the streets of Dover, along with another man. Sallie died in 1822, and John died in 1837. Both are buried in Dover City Cemetery.

John William’s parents were James Monroe Scarborough and Mary Andrews. Both were born in Brunswick County, Virginia, James in 1753, and Mary in 1755. They married in Brunswick County about 1780. James was a circuit-riding Methodist preacher, and moved with his family to Montgomery County, North Carolina in 1785. They then moved on to Stewart County, Tennessee in 1804. James died there in 1847, and Mary died sometime after that. I do not know where either is buried.

James’s parents were John Scarborough and Rachel Johnson. They were both born in Brunswick County, Virginia, and both died in Montgomery County, North Carolina, although dates are sketchy for births, marriage, and deaths for them. John evidently did some work as a surveyor, and while he did not serve as a soldier in the Revolution, there may be evidence that he contributed to the cause with money and goods provided.

I am hoping to uncover a little more on the Scarborough family this summer. But either way, just visiting the areas where they lived is enjoyable.

Travel Buddy and I have visited Illinois before, but we have almost always traveled through the southern part of the state.

This time, we had a number of genealogical sites to visit, and a wonderfully historic one, as well.

First, we traveled to Springfield, and visited Lincoln’s Tomb. Such an impressive monument. I can’t believe we’ve never been to visit it before. Plenty of tour buses were headed that way, too, bringing tons of folks in to pay their respects to a great man.

While in the area, we heard a rumor that for the 150th anniversary of Lincoln’s death (2015) the plan is to run Lincoln’s train (designed for his use in life, it was never used by him except in death) along the same route it traveled when bringing Lincoln’s body back to Springfield, following his assassination in Washington, DC. If this is true, we wonder who will ride it, what stops it will make, and how wide-spread the travels will be.

In Decatur County, I struggled to find anything related to my Beach and Dalton families, but it was not to be.

For the next three days we used this area as a hub, driving first to McHenry County (but unsuccessfully finding anything on my Gilliland family) then on to Boone County (where my ancestors Anna Randall DeWolf and Putnam DeWolf are buried in separate cemeteries, and without tombstones, but at least I could visit the areas where each was buried) then through Ogle County, where Lewis H. Jones and Eliza Gilliland were married (didn’t stop…already had their marriage information, and besides, tornado warnings were sounding) and finally to Palmyra, in Lee County, where my great-grandfather William Jones was born, and my great-great-great-grandfather Cyrus Jones was not only buried, but had a tombstone. (Yessssss!!)

I did not discover much about my family in Illinois, but I greatly enjoyed visiting where they had lived, and sometimes, that’s enough.